When “club” golfers are asked about their games and what are the strengths and weaknesses, a large majority will refer to their putting as strength and of course in most cases this will be true relatively speaking. In other words there is likely to be more concerning issues like driving accuracy, poor striking or inconsistency. The only downside to this is that a lot of golfers will tend not to work on the standard of their putting and yet it is something that can give a valuable return in our performance without changing too much. The biggest change is to go to the putting green and work on the relevant distance to your standard of game. There are two goals that every player should focus on while working on their putting: 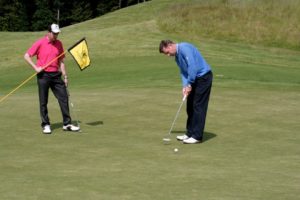 Some golf statistics can be misleading and can hamper your improvement for example the stat of putts per round doesn’t really have much value in telling us if we are reaching a good standard or not as it is reliant on other factors like how close to the pin we hit it. However using relevant statistics that show the standards we should be aiming for is something we can use to our advantage. The following figures are taken from Mark Broadie’s book “Every shot counts”. They give us some valuable information on what standard we should be looking to achieve relative to improving our handicap.

Here’s a chart that shows the probability of one-putting from different distances depending on a golfer’s ability level:

What we see from the chart is that outside of 3 feet an 18 handicapper can be a little shaky and when putts become 8 foot or more there is a significant drop in holed putts. So the 18 handicapper really needs to focus a large part of their time on the putting green at 4 to 8 foot. The scratch golfer needs to devote more time to 10 to 15 feet away from the hole. In practice we need to set attainable goals thru a pathway so there is little point in the 18 handicapper going straight to 10 to 15 feet range without first achieving good levels at 4 to 8 feet.

Here’s a chart that shows the probability of golfers of different ability levels three-putting from different distances:

There is of course a correlation with the first chart and the second. Because the tour player is better at holing out from a slightly longer range than the 18 handicapper it means his lag putting (distance control) has a slightly bigger margin of error.

What this second chart shows us is that practising good lag putting for the 18 handicapper should start at a range of 25 – 30 feet whereas the tour player would benefit more from 40 feet and beyond.

For some golfers it may require a few little alterations to your style that you can work at with a coach, but for a lot of golfers it is just a case of spending a bit of quality time on the practice green and not wasting that time just hitting putts with no real purpose. I hope I have also been able to point out the benefits of using statistics wisely and that charting your game can be advantageous if the figures are looked at in a sensible way.

Following the announcement that Ireland will return to full Level 5
restrictions golf is prohibited from 1st – 31st January 2021.