Be Positive about NOT 3 Putting

Be Positive about NOT 3 Putting

I’m sure you are aware of the idea that parts of our thoughts won’t distinguish the difference between negative and positive. If you say to someone “don’t think of an orange – it is likely they will think of an orange. If you think out on the course “don’t hit it in that bunker – we have just increased the likely hood that it is going to end up in the sand. For this reason I am not suggesting you go to the course and say to yourself “DON’T 3 PUTT”. What I am advising is that golfers understand that using stats collated by Peter Sanders (one of main people behind the measuring of golf performance using strokes gained), we can focus on the distance that is relative to what we are likely to face regularly on the course. If we know the average 2 putt distances from different golf levels, then armed with this information we can be more conservative from putts around this range.

In previous articles I have mentioned the 3 main components to putting – green reading, pace control and start line command and have said that each component has its own relevance of importance when putting. In some cases it could be argued that one of the components is maybe more important, for example, line is maybe the important factor for a tour player who’s putting stats show that 8 feet and under is an area where pace is probably going to be controlled sufficiently so that as long as the correct start line is achieved there is a high percentage the ball will be holed even if pace is marginally out. This does not mean that pace is totally irrelevant at this distance it just means that the skill of pace control in a tour player is sufficiently developed for it not to be the main or conscious focus. In this particular article the focus point will be mainly on pace control.

According to Peter Sanders his stats show that over half of the average club golfer’s first putt will take place from between 11 and 30 feet away from the hole. He also shows that the average golfer will 3 putt seven times more often than the average tour player from this range. Interestingly average golfers only 3 putt four times as often as a tour player once the distance goes over 30 feet. One of the other stats that is very interesting is average 2 putt distance for a tour player is 35 feet but for a 15 to 19 handicapper it drops down to 16 feet. In other words for the higher handicapper once the distance increases there is going to a number of 3 putts.

So how can we make use of this information? The trend of average 2 putt distance increasing the lower the handicap is consistent through the different handicap levels and it may at first seem obvious but it sends out an important message to the golfer – improve distance control from 11 to 30 feet and you will score better. Although it may be impeded by poor technique leading to such things as inconsistent ball strike, pace control is largely a honed skill. The simplest example of this type of skill would be our abilities to gauge the distance when we throw a ball to each other or simply throwing a piece of scrunched up paper in a bin that is a couple of yards away. It’s our brains capacity to work out the dimensions of the task very unconsciously and then the body movements to react accordingly. In putting the consistency of this task is also very much linked into our ability to be rhythmical with our movements as well as not getting consciously getting bogged down with technical thoughts (there is a time and place for this technical work).

Clearly the stats above show that Tour players are very proficient at the distance of 11 to 30 feet but this has come through diligent specific training to refine and hone this skill. There are a number of drills you could use but I would recommend not using a hole to start with simply because you can get caught up with trying to get the line correct. I would mark an area (use tees or ball markers) that is 3 to 4 feet in depth, it can be a wide as you like. I would use maybe 5 balls and then putt all the balls from the same distance, say 15 feet. The task is to get all the balls into the target distance in a row. Once this is achieved I would move to another distance within the range of 11 to 30 feet.

Obviously a tour player’s ability to hole the shorter length putts (start line command) will contribute to the lack of 3 putts but in my opinion it is the refined skill of pace control that means they don’t waste shots too many times by racing balls past the hole because of a gun-hoe attitude or leave putts woefully short because of lack of practice in this important area of the game. 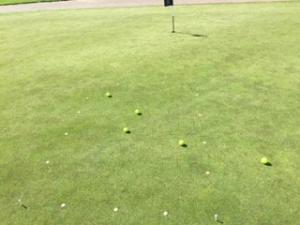