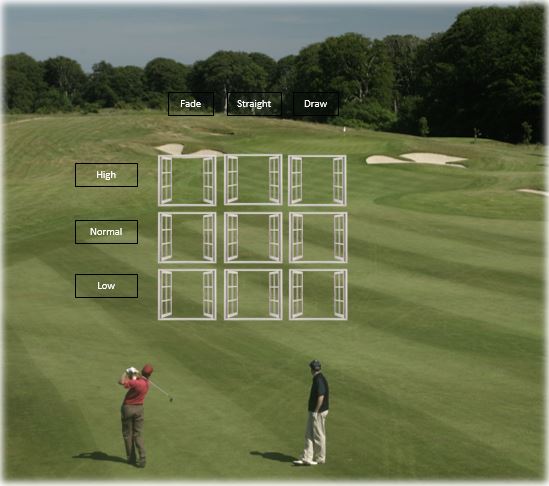 1I hope it’s fair to say in broad general terms that if you went and asked those golfers hitting balls on the range “what are you working on?” A common reply would be along the lines of “trying to hit it straight” and “trying to be consistent”. So it may be a bit strange to read this article when the premise of it is to suggest that you could try to improve these things by doing almost the complete opposite.
The main point to trying this practice drill is to become familiar with the idea that the game of golf requires us to make subtle changes to our swing movements to successfully deal with the different situations we face out on the course. The pursuit of robotic repetition is detrimental not just for the above reasons but it’s this quest that gets people locked in certain swing habits that limits their game and control of their body movements.
If you start with something like a six iron and imagine what a normal straight shot would look like and then envisage an open window in the sky about mid-flight so if you hit this normal straight six iron it would fly through the window. Then simply go ahead and try this. Next visualise an open window above your normal flighted shot so that this time for the ball to travel through it will need to be a high straight shot. Next visualise a window below – now requiring a low flighted shot but still straight. So we have 3 different flights. If you do the same thing but with visualised windows to the right, we would be trying hit the three draw shapes, high draw, normal draw and low draw shots (the ball curling from right to left for a right handed golfer). The last 3 flight are with the visualised windows to the left and we are looking to curl the ball from left to right, a fade.
To do this drill you may need a certain appreciation of the how swing path and clubface position at impact affect direction of the ball, however the big key to this exercise is to not be over conscious about swing thoughts. You will need to explore the idea of exaggeration – especially to begin with. Knowing what it feels like to do something too much and too little should give you an idea of where just right is. Initially this isn’t about hitting wonderful accurate shots, although building competence in these shots can have great benefits out on the course, it’s about understanding how you can feel your movements and not get stuck into limiting habits. You may have heard or read accomplished players answer a question like “how do you hit a fade”? And the reply is “I just think fade”! Well not surprisingly this takes practice. I know this sort of drill is used by some tour players before they go out to play as part of their warm up routine on the range. It’s a good way to find out where the neutral swing is, but I would think it’s a good drill for any golfer to try it has a lot more benefits than just the ability to hit 9 different shots.