What makes a difference in putting?

What makes a difference in putting?

I saw a golfer out on the practice putting green with a practice aid that helped guide the golfers putting stroke path and he also had something on the face of the putter that told him where he was striking the ball in relation to sweet spot. I watched for a good while from a distance but could see that despite these training aids a good number of putts were still being missed. So how important in putting are centeredness of strike and stroke path and what other things should be considered.

For the purpose of this article we will use a flat, straight 12 foot putt as the model.

First let’s look at stroke path. This is the path or direction the clubhead takes in relation to the target line in the hitting area. Typically this may be described as neutral (straight), in-to-out or out-to-in (although there may also be a few variations on these paths). Stroke path accounts for approximately 17% of the initial balls direction. On our 12 foot putt model the path needs to be outside 3.5 degrees of our neutral path before the putt will be missed.

Q –What % of 12 foot putts would golfers miss due to not controlling stroke path outside of this 3.5 degrees range?

A – Average club golfers 1% of putts missed, Pro golfers a lot less than 1%. So the conclusion is that in general terms we generally don’t mess up stroke path enough to make a significant difference.

Centeredness of strike is where the ball strikes the face of the putter in relation to the lateral centre or sweet spot of the face. On our 12 foot model the critical point that the ball needs to bit struck away from this centre point is outside 1.1cm. This is a conservative estimate and this will vary a little depending on what type of putter is being used, so if you are using a well-made, balanced putter that has a high MOI (moment of inertia) then this margin increases even more.

Q –What % of 12 foot putts would golfers miss due to not controlling centeredness of strike outside this 1.1cm range?

A – Average club golfers 1% of putts missed, Pro golfers a lot less than 1%. So the conclusion is that in general terms we generally don’t mess up centeredness of strike enough to make a significant difference.

Face direction control is our ability to have the clubface pointing in the right direction when we strike the ball. Once again using our 12 foot model and assuming we have reasonable pace control our clubface needs to be greater than 0.6 degrees open or closed before the putt will be missed. (Remember this is a straight putt and we are assuming we have good pace control).

Q –What % of 12 foot putts would golfers miss due to not controlling face direction outside this 0.6 degree range?

A – Average club golfers 44% of putts missed, Pro golfers 8%. Now we see there is not only a much bigger percentage of putts missed for pro’s but there is a significant difference when it comes to the average golfer. So learning to control our clubface direction at impact certainly should be high on our list of things to practice.

Of course there is a number other things to consider here. Optimal ball speed control is going to have an impact and this will become more important on a breaking putt. Also green inconsistencies or irregularities can influence whether we hole the putt or not. Dave Pelz found that up to 20% of 12 foot putts will still miss even on good greens dues to these irregularities.

One final word, developing your green reading skills is the only way you are going to benefit  from learning to hit the ball on the right line with the right pace so don’t forget to practice this ability. 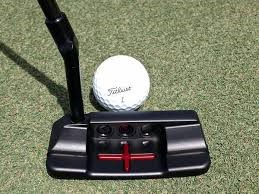