A Picture of Impact

A Picture of Impact

As inventions that have had a major impact on our lives the mobile smart phone will certainly rank at the top end of the list. Technology is now used in golf in many ways from equipment research and design to the many uses of high tech ways of finding out how we can hit the ball better. On the slightly negative side some people may feel it has complicated the process, also a prominent bio mechanist, who would embrace and use the latest technology, has told me that he has come across a number of elite golfers who had made golf swings worse by try to manipulate launch monitor numbers without understanding the effect it has had on other parts of the swing process. That been said I think the using tech sensibly can help us in improving our game.

One of the things that golf coaches uses and that we used to spend quite a bit of money on was a decent video camera with slow motion capture/playback facility. Now most camera phones have this ability and I would not hesitate in recommending golfers every now and then take a video of their swings. If nothing more it will show a lot of golfers the way you swing does not always represent the way we think or feel the way we are swinging the club. For the most part you are not looking for detail but things like how much sway or lifting you have in the swing. Sometimes it may be just a good way for people to get a good visual of their posture and set up.

Some driving ranges have mirrors behind the bays that you can use but if there isn’t one handy you can go to the video screen on your phone, set it to the selfie mode and then prop it up against a practice ball bag or bucket at the angle you need to see yourself. I have found this useful at times in putting practice as well.

One of the more effective ways I have used the phones video is by focusing on the impact position especially from the face on view but you will need someone to operate the camera. It starts with a drill – without making a back-swing, go from set up to what you think impact should feel like. It may be useful to look at either some pictures of good players at impact to get a sense of some of the differences between impact and set up. In real simple terms you will notice more weight in your front or lead foot, hip rotated ahead of torso rotation and a certain amount of shaft lean particularly with an iron. Once you have got into impact take a still photo from face on. The next thing is to get the person to take a slow motion video of you hitting the ball from the same face on position. Now very simply playback the video until you get to impact and compare that picture to your previous impact photo. Of course I’m not suggesting for a minute that all problems can be solved like this but I do think it is good way for some club golfers to use the video camera on our phones to give us a better understanding one of the influential areas of our swing. 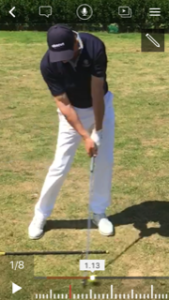