The start of the backswing is referred to as the “move-away” or “take-away”. The great Ben Hogan felt that the two most important areas of his swing were the first foot of the move-away and the first foot of the downswing. It would be easy to start a debate on what is the most important area of the swing and to look at the slight differences from one golfer to the next but just in terms of efficiency, I think it’s reasonable to consider the start of the backswing as key area of a proficient sequence of movement. In other words a good starting point can lead to less compensation later on in the swing.

One of the most common ways of describing the move-away is the term “one piece take-away”. Unfortunately I think this term gets taken too literally and doesn’t produce the ideal sequence. One piece suggests that everything should move together but what this tends to lead to is early hip rotation in the backswing and the upper body reaches its full turn before the arms have stopped swinging. The hips are now not in as strong a position as they could be and the body has to wait for the arms to complete their swinging motion which in turn can lead to disconnection and poor co-ordination. 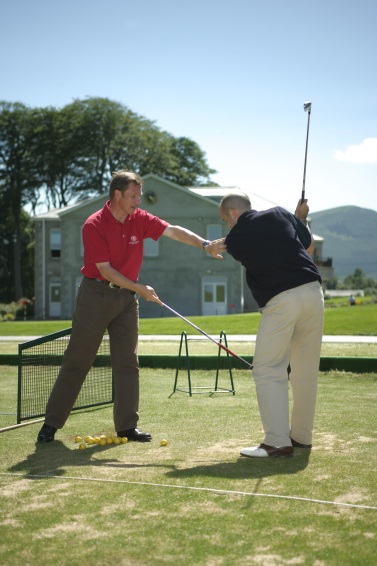 The ideal scenario for the move-away is the clubhead starts the motion this is then followed by the hands and arms. The next movement should be the upper body rotation followed by the hip motion and down to the ankles and feet last. In this idyllic sequence there will be no pronounced delay between each segmental movement, it will just flow like a domino effect. To get this motion started you will need to feel a slight hands or wrist movement to get the clubhead going, this may make you feel a bit handsy to begin with. You also may give some focus to stabilising your lower half to begin with. As with all areas of our swing changes it is also too easy to tighten or stiffen up the muscles, this is one area you cannot really afford to let this happen as it will stop the natural flow of the sequence.